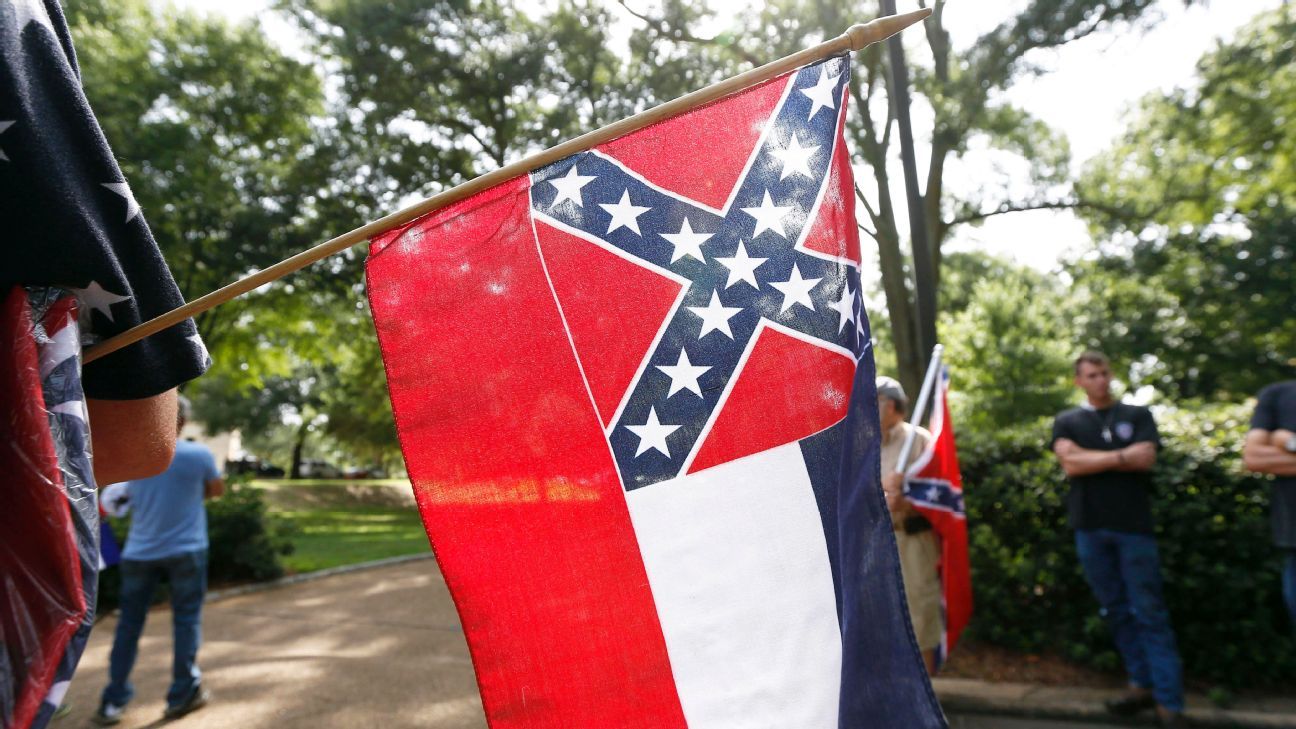 Mississippi Gov. Tate Reeves on Tuesday signed a bill to retire the last state flag in the U.S. with the Confederate battle emblem following widespread, increased pressure that came in part from the sports world.

“This is not a political moment to me but a solemn occasion to lead our Mississippi family to come together, to be reconciled, and to move on,” Reeves said in a statement. “We are a resilient people defined by our hospitality. We are a people of great faith. Now, more than ever, we must lean on that faith, put our divisions behind us, and unite for a greater good.”

Mississippi has faced increasing pressure to change its flag since protests against racial injustice have focused attention on Confederate symbols.

Earlier this month, NASCAR banned the Confederate flag at its races two days after Bubba Wallace, the lone Black driver in NASCAR’s three national series, called for the organization to remove it.

A day after the SEC’s warning, the NCAA expanded its Confederate flag policy to prohibit all of its championship events from being held in states where the flag is flown.

A broad coalition of legislators on Sunday passed the landmark legislation to change the 126-year-old Mississippi state flag, capping a weekend of emotional debate and decades of effort by Black lawmakers and others who see the rebel emblem as a symbol of hatred.

The Confederate battle emblem has a red field topped by a blue X with 13 white stars. White supremacist legislators put it on the upper-left corner of the Mississippi flag in 1894, as white people were squelching political power that African Americans had gained after the Civil War.

Critics have said for generations that it’s wrong for a state where 38% of the people are Black to have a flag marked by the Confederacy, particularly since the Ku Klux Klan and other hate groups have used the symbol to promote racist agendas.

Mississippi voters chose to keep the flag in a 2001 statewide election, with supporters saying they saw it as a symbol of Southern heritage. But since then, a growing number of cities and all the state’s public universities have abandoned it.

A groundswell of young activists, college athletes and leaders from business, religion, education and sports called on Mississippi to change its flag, finally providing the momentum for legislators to vote.

A commission will now design a new flag, one that cannot include the Confederate symbol and must have the words “In God We Trust.” Voters will be asked to approve the new design in the Nov. 3 election. If they reject it, the commission will draft a different design using the same guidelines, to be sent to voters later.

Said Reeves in signing over the flag’s demise, “We are all Mississippians and we must all come together. What better way to do that than include “In God We Trust” on our new state banner.”

He added: “The people of Mississippi, black and white, and young and old, can be proud of a banner that puts our faith front and center. We can unite under it. We can move forward together.”