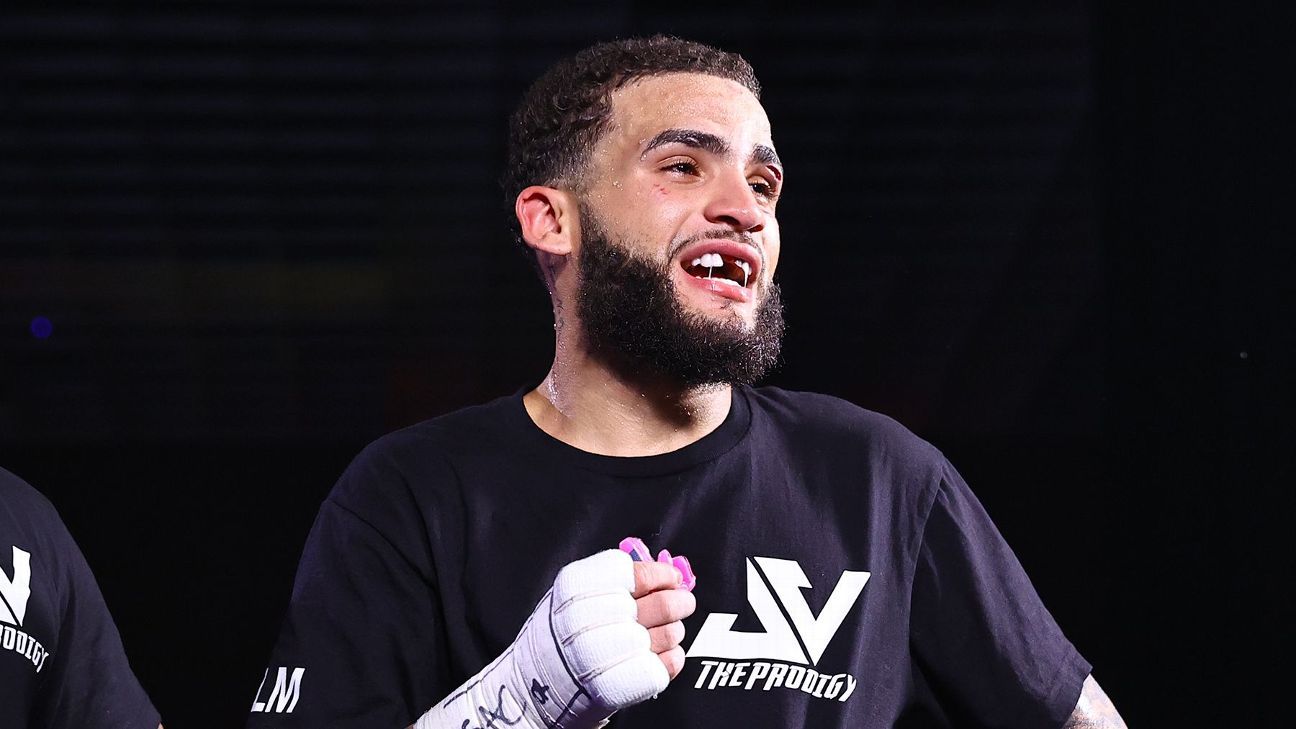 Junior welterweight hopeful Josue Vargas enjoyed a solid night’s work in a dominant, unanimous decision victory over Salvador Briceno in the co-main event of a Top Rank boxing card at the MGM Grand Conference Center in Las Vegas on Tuesday.

Although the scores were wide (99-91, 100-90 and 100-90), Vargas (17-1, 9 KOs) had to work hard against Briceno (17-6, 11 KOs), who despite taking a lot of punches in almost every round, never wavered and kept coming forward. Briceno was the taller man, but he never could quite get a bead on Vargas, who worked effectively from midrange and inside, landing uppercuts, straight lefts and right hooks. Vargas often threw rapid combinations that got Briceno’s attention, but never came close to scoring the stoppage.

The fight came at a physical cost for Vargas, who had his front upper teeth knocked out in the fourth round. He also suffered a cut over his left eye from an accidental clash of heads in the sixth round. But despite all this, the 22-year-old southpaw was able to keep it together to finish in strong fashion.

There was one major difference for Vargas, as his father and trainer could not work the corner because he had broken the COVID-19 protocols at the MGM Grand by going outside their designated floor without a mask the night before. Trainer Raul Rivas took over for Vargas, but during a pre-fight interview with Bernardo Osuna, Vargas was visibly emotional as he discussed the situation. Vargas was able to overcome the adversity and still put forth a strong effort.

“It was a little bit tough,” Vargas said about not having his father in the corner. “I’m always used to having my dad in the corner, and we have that chemistry together that he takes something out of me that nobody can. That’s something we’ve been working on for years. There’s just a little thing in the corner that he tells me in the corner and I just start punching and punching my fighters.”

John Bauza remained undefeated by clearly outboxing Larry Fryers over eight rounds. It was a sharp outing for the southpaw who held off the hard-charging Fryers for much of the night to score a unanimous decision victory (79-73, 80-72 and 80-72).

Bauza (14-0, 5 KOs) was often pressured by Fryers (11-3, 4 KOs), who attempted to rough him up inside. While Fryers was successful at certain points, the majority of the fight was controlled by the quicker Bauza, who landed sharp counter punches throughout the night.

After eight rounds, not only was Bauza the more active fighter (throwing 321 punches to 279 for Fryers), but he also outlanded him 103 to 76 in total punches.

In the opening bout of the night, middleweight Isiah Jones earned a six-round majority decision over the previously unbeaten Donte Stubbs by the scores of 57-57, 58-56 and 59-55.

Jones (9-2, 3 KOs) — who lost a decision two weeks ago against Nikoloz Sekhniashvili — boxed from the outside for most of the fight, while Stubbs (6-1, 2 KOs) was in the center of the ring as he came forward and threw the more forceful punches. But neither man ever really gained control of the bout. Exchanges were rare, and neither man was hurt in this contest.

At the end, Jones outlanded Stubbs 53-44 in total punches to get his hands raised in victory.