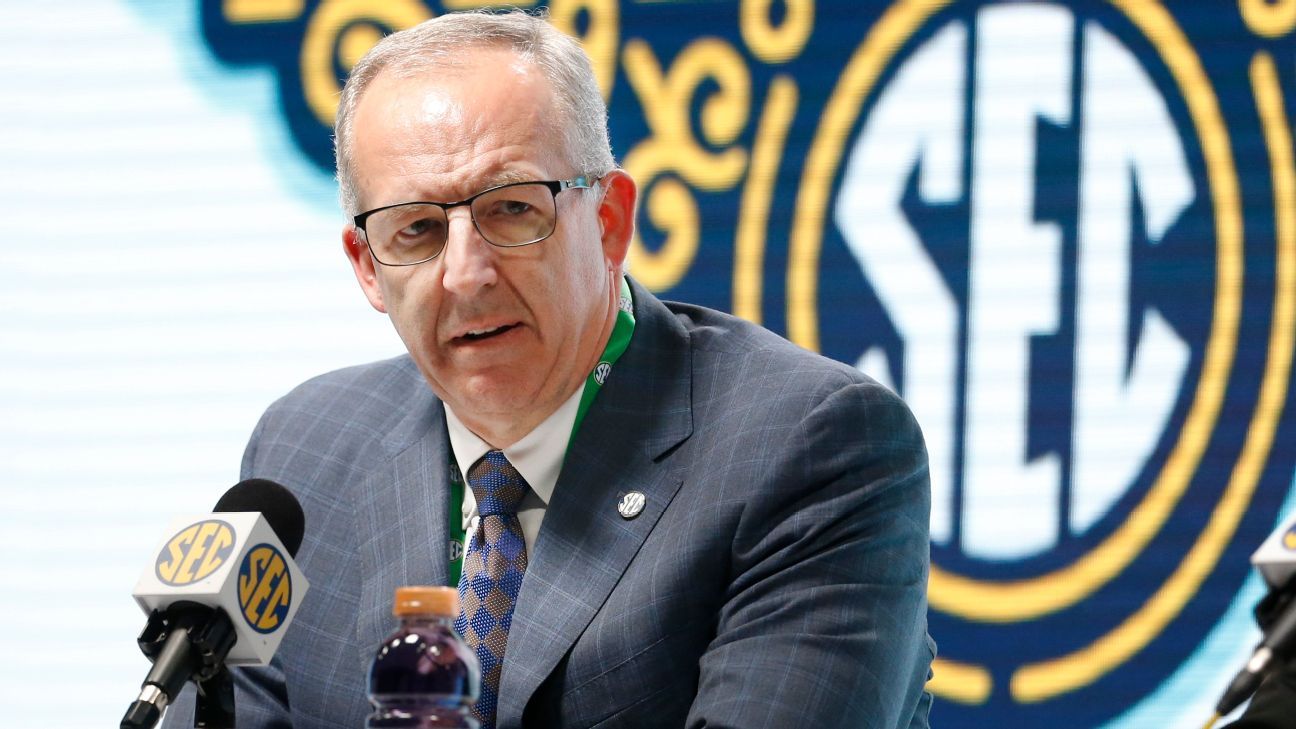 As the number of coronavirus cases continues to climb throughout the country, the level of concern among college football’s decision-makers has risen, too, but the Power 5 conference leaders have told ESPN they still aren’t ready to make any major changes to the sport’s calendar, instead targeting the end of July to determine if the season can start on time.

“We said from the onset of this pandemic that circumstances around the virus would guide our decision-making, and it is clear recent developments related to COVID-19 have not been trending in the right direction,” SEC commissioner Greg Sankey said in a statement provided Monday to ESPN. “There are important decisions to be made in the coming weeks, and by late July there should be more clarity about the fall season. In the meantime, our athletics programs will continue to effectively manage the health and safety of our student-athletes as they continue voluntary activities on their respective campuses.”

The transition from voluntary to mandatory workouts is already here, as schools that open the season on Aug. 29 could begin required workouts Monday. For teams that begin the season Labor Day weekend, required workouts will begin July 13, followed by an enhanced training schedule that begins July 24 and a normal, four-week preseason camp starting Aug. 7.

West Virginia athletic director Shane Lyons, who is chair of the Football Oversight Committee and helped spearhead the NCAA-approved, six-week return plan that was approved last month, said moving forward with it will have to be a campus-to-campus decision.

“For us in college sports and sports in general,” he said, “it’s not trending the way we were hoping it would.”

According to The Washington Post, the United States on Monday entered its 28th straight day of reporting record-high average infections. American Athletic Conference commissioner Mike Aresco said Friday that if students don’t return to college campuses this fall, “all bets are off.”

“I’m still not of the mind to say, ‘Gee, we shouldn’t do this,’ or ‘We should throw in the towel,’ but on the other hand, am I less confident than I was maybe a week ago? Absolutely,” he said. “I don’t think there’s any way you wouldn’t be.

One FBS commissioner, who spoke candidly to ESPN on the condition of anonymity, took it a step further.

“I’m very concerned,” the commissioner said. “For so long, we’ve been saying we had time and things were going to change and we were very hopeful. I’m still hopeful that we have college football, I’m just more pessimistic that we won’t have it on time. I don’t see us starting on time at this point. One day I thought, ‘I better look at the calendar,’ because I felt like it was March 11 again.”

Big 12 commissioner Bob Bowlsby said Monday that until they’re told to stop by local health or government officials, the league will continue to put “one foot in front of the other.”

“I think you’d have to not be paying attention if you haven’t noticed the trends are not positive, but the campuses are learning how to coexist with the virus, and so they’re learning more about the testing, and about how you go about managing it,” Bowlsby said. “We haven’t been told by public health officials or our local doctors or our scientific consultants that we should stop doing what we’re doing. My feeling is you just keep putting one foot in front of the other until you’re advised it’s a bad idea. When we get that advice, obviously the safety, health and well-being of our student-athletes and staff is first. When we’re told, ‘This just isn’t going to work out,’ obviously nobody is going to be resisting that … but they haven’t said that to us yet.”

Nor has anyone in the Pac-12, though the footprint of that conference includes hotspots Arizona and California. Arizona hit new highs in its seven-day average of rolling cases, according to The Post, and experienced record coronavirus hospitalizations. USC has already announced it will transition to mainly online courses, while allowing students on campus for certain activities.

Pac-12 commissioner Larry Scott said he continues to be hopeful the season can start on time, but acknowledges the need to be flexible.

“There’s no denying that the last few weeks things have taken a turn for the worse in much of our country and much of our conference in terms of what’s happened when governors and local officials have taken their foot off the break a little bit,” Scott said. “… I’ve tried to be cautiously optimistic, and that’s becoming a little bit harder over the last couple of weeks, but we’re going to take a lot of guidance from what our campuses do over the coming weeks, and see how the data trends and what our medical experts are saying.”

At West Virginia, Lyons said four football players test positive last week, and there were five positive tests in men’s basketball, so he delayed their return from July 6 to July 20. While he hasn’t had to halt the football workouts yet, Lyons said the next three weeks will be critical to making an informed decision about the season.

“We feel that last week of July — you could potentially go into that first week in August — which is roughly three weeks prior to the first game, and start making decisions, but that’s really pushing up against the deadline at that point,” Lyons said. ” … What I’m being told by the medical experts is the next two and a half to three weeks is really going to tell us what August and the possibility of starting a season in September is going to look like more than continuing practice activities.”

In the only major significant change to the schedule so far, Notre Dame announced last month it would face Navy at Navy-Marine Corps Memorial Stadium in Annapolis, most likely on Labor Day weekend, instead of in Dublin, Ireland, on Aug. 29 as originally planned. Navy athletic director Chet Gladchuk told ESPN on Friday that both schools are still planning for the game to take place — but conceded his overall confidence level in a normal fall season has dwindled.

“I think we were all of a different mindset two weeks ago,” Gladchuk said. “Let’s go, let’s roll, let’s make it work. We’ve all done into logistical details of making it happen. … I think we’re all a little concerned right now with the surge that you’ve seen, certainly in the AAC because it’s states that are really fighting an uphill battle today.

“[The state of] Florida, UCF, South Florida, Texas – we’ve got a great present in Texas – … I think there’s a little bit more uncertainty right now,” he said. “Two weeks ago it was very optimistic. Today, I’m not saying anyone has changed their mind, I think they’re being a little more guarded with their optimism in the way it’s exploding.”

Regardless of how the season unfolds, College Football Playoff executive director Bill Hancock said, “The CFP will be ready for whatever comes down,” but he declined to discuss any hypothetical situations or potential contingency plans for the postseason.

While college football fans throughout the country are eager to learn if and when there will be a season, Bowlsby cautioned that it’s nearly impossible to set a true deadline for making any sweeping statements about the season.

“It’s not a declaratory process,” Bowlsby said. “I don’t think we can all of a sudden one day say, ‘Yep, we’ve seen all the signs and we’re full speed ahead.’ I just don’t think that’s the nature of it. Some will be seeing positive tests throughout the fall. There will be occasions when games will have to be altered or cancelled, but it’s not likely everybody is going to be in the same situation at the same time. People are wanting to say, ‘here’s the date, we either flip the switch or we don’t flip the switch,’ and it just doesn’t work that way.”

Will college players skipping the season for the draft become a trend?
CWI could trim board in response to task force recommendations
NBA restart real or not: Our experts’ new look at eight big questions
Jackpot: Vegas nets West’s top seed with OT win
Marlins cleared to play vs. Orioles, source says