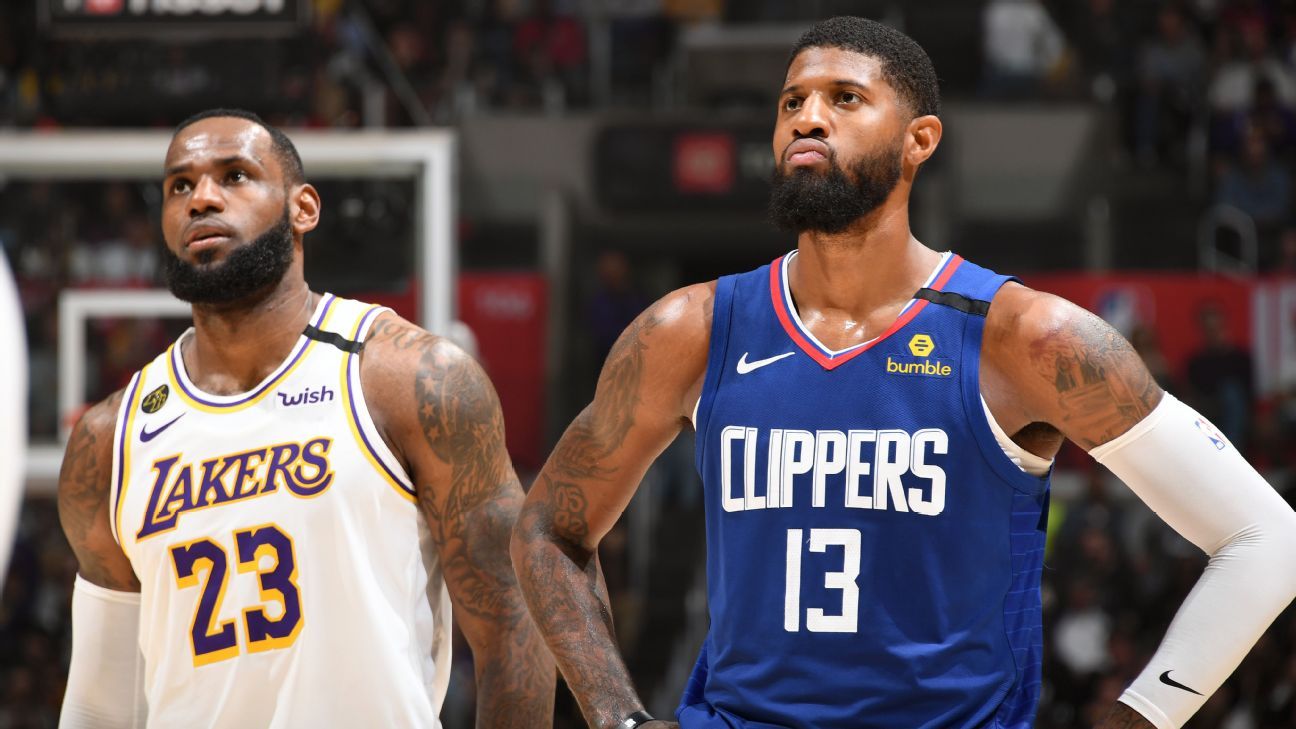 How well will the top teams in the NBA restart answer their big questions heading into the postseason? We polled the ESPN Forecast panel of 40 NBA experts for their confidence level in one key unknown about each of the top 10 teams in our latest round of power rankings.

Can the Houston Rockets‘ micro-ball approach work? Will the Los Angeles Lakers find an effective closing lineup? Do the Toronto Raptors have enough to take down the league-leading Milwaukee Bucks once again?

Voters marked their confidence in how effectively each team will answer each question, ranging from 0% to 100%. Here are the results, with teams ranked from most confidence to least confidence.

MORE: NBA Power Rankings and key questions for all 22 teams

After dealing with injuries and roster moves for most of the season, the LA Clippers were finding a rhythm before the NBA shutdown in March.

“What I know for real was the last 10 games [before the season was suspended], we were turning into the Clippers,” head coach Doc Rivers said in April. “You could literally feel it. … We started understanding each other. … We were playing seamlessly through [Kawhi Leonard and Paul George]. It wasn’t forced anymore.”

Now they’ll need to find a way to pick up where they left off after a four-month hiatus. The five-man lineup that closed against the Lakers on March 8 — featuring Leonard, George, Lou Williams, Montrezl Harrell and Marcus Morris Sr. — has logged only 12 minutes together, but our panel is high on this team reaching its ceiling. More than 80% of voters expressed at least 70% confidence in LA figuring it out.

MORE: How the NBA restart rules work for substitute players

The Lakers had yet to settle on a go-to lineup during their 101 clutch minutes in the regular season, with Kentavious Caldwell-Pope, Danny Green, Alex Caruso, Kyle Kuzma, Rajon Rondo and Avery Bradley all getting a chance to flank LeBron James and Anthony Davis.

Bradley won’t join the team in Orlando, but our panel mostly believes in the two superstars and the available supporting cast at the end of games. More than 64% of voters expressed at least 80% confidence in the team’s closing unit.

MORE: The 12 most important games of the restart

The Bucks have an incredible plus-16.1 net rating with likely MVP Giannis Antetokounmpo on the floor, and a respectable plus-4.1 mark when he sits, which would rank in the top seven among all NBA teams this season. But Milwaukee got crushed when Giannis sat against the Raptors in last year’s playoffs, posting a minus-10.3 net rating. Complementary stars Eric Bledsoe and Khris Middleton have also yet to prove real postseason consistency, especially as secondary creators on offense.

Our panel likes this group, though, with only 14% of voters expressing less than 70% confidence in the talent surrounding Antetokounmpo.

MORE: What people in the NBA are saying about the Orlando restart

The Rockets don’t have a traditional center anywhere in their rotation — a move that found quick success and then a string of losses after Houston traded Clint Capela in February.

“A lot of this [strategy] is having a firm belief in it, players believing in it and then imposing our will,” head coach Mike D’Antoni said before the shutdown. “Then our strengths become what wins. But if they impose their will — if they outrebound us and knock us around and we don’t root ’em off and all that, if we don’t guard at all — yeah, then it’s crazy and we won’t win.”

There were few votes for total failure or resounding success here among our panel, but the majority predict that the Rockets’ small-ball approach will mostly work.

MORE: How quickly can NBA players get into game shape?

Jokic has yet to join the Denver Nuggets in Orlando following a positive coronavirus test in June, though GM Calvin Booth said the team wasn’t concerned about the All-Star center making it back from Serbia and participating in the restart now that he has had multiple negative tests.

Assuming he’s playing, how effective will Jokic be after losing a reported 40 pounds during the hiatus?

“Hey, Joker got a little four pack,” teammate Jamal Murray said last month. “I love it. … It is kind of weird to see him like this where he is a lot more athletic, he is moving a lot better.”

There’s a case that Jokic’s size was a real advantage on offense, and multiple members of our panel expressed a lack of confidence in a skinnier Jokic being as effective. However, most of the voters aren’t seriously concerned.

MORE: How NBA coaches are preparing for the bubble

After missing five games due to knee soreness following the All-Star break, Walker struggled in his return to the court. He has played in only 11 career postseason games, and smaller guards can sometimes struggle generating offense in the playoffs.

A majority of our panel still expressed at least 70% confidence in Walker’s ability to be effective for Boston as games gets more physical, with others taking a wait-and-see approach.

The Miami Heat have a couple of defensive stars on their team in Jimmy Butler and Bam Adebayo, yet they didn’t get stops like real title contenders for most of the season. Can this team find another gear in the playoffs?

There were a few votes for the Heat either being much better or much worse than their 14th-ranked regular-season defense. A majority of the panel expressed tepid confidence here.

Both Luka Doncic and Kristaps Porzingis will be making their playoff debuts this season (barring catastrophe in the seeding games). The pair logged a plus-6.7 net rating when sharing the court during the regular season, which ranked 37th among the 146 NBA duos to play at least 1,000 minutes together.

There were few votes for Doncic and Porzingis turning into a postseason disaster, as most of the panel expressed slight optimism that they’d find a way to be effective.

In 429 minutes with a lineup featuring Ben Simmons, Joel Embiid and Al Horford, the Sixers have mostly been average — with a minus-0.8 net rating featuring a great defense and horrible offense.

Our panel was split here, though few voters expressed overwhelming confidence in Philly’s jumbo grouping finding success. Only 10% expressed more than 70% confidence in the trio.

MORE: The new kicks you’ll see in the NBA bubble

The Raptors’ matchup with the Bucks

Toronto took down Milwaukee last season, though this year the Raptors will have to do it without NBA Finals MVP Kawhi Leonard.

ESPN’s Basketball Power Index predicts that this is the most likely Eastern Conference finals matchup, with a 65.8% likelihood. A majority of our panel is not very high on the Raptors’ ability to flummox the Bucks yet again, with 19% expressing at least 70% confidence.