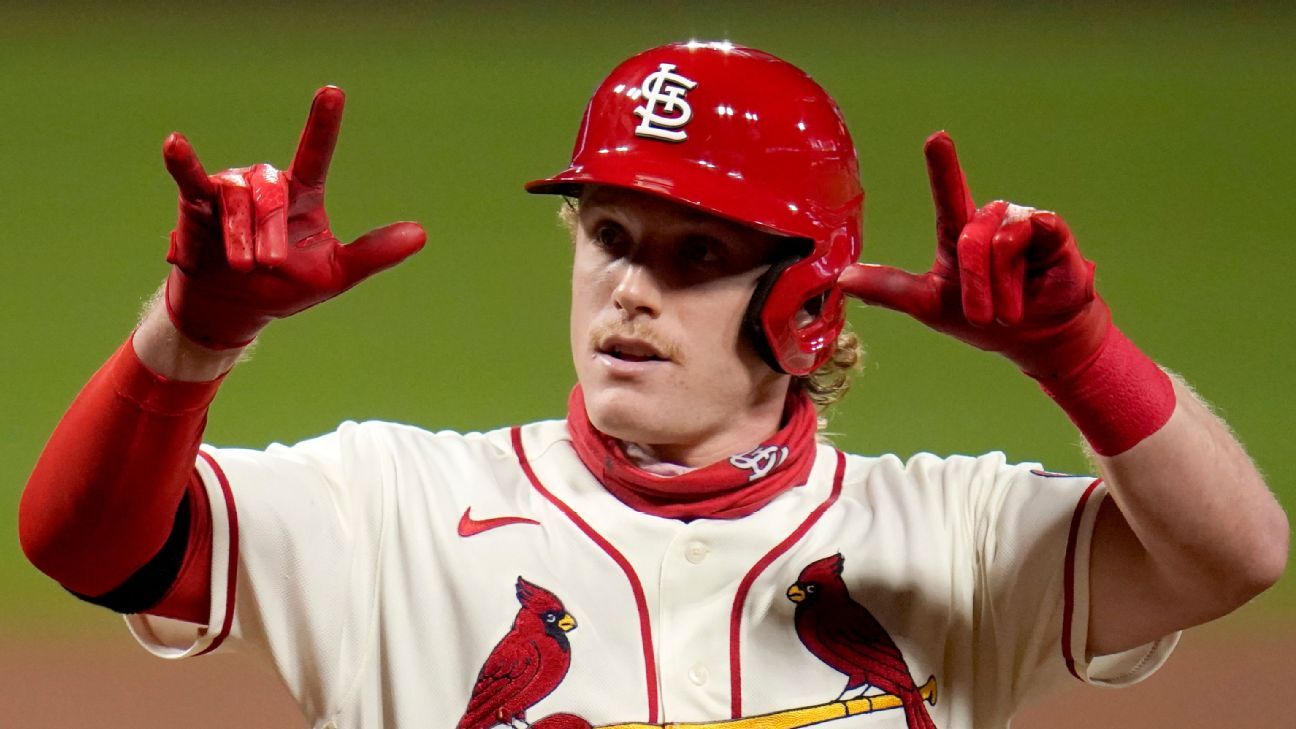 Did you think we would get here? With one week remaining in this shortened, 60-game season, without the benefit of a bubble to keep the players completely isolated from the coronavirus, the 30 teams and 1,295 different players who have worn a major league uniform in 2020 are going to make it to the end. With a mandatory quarantine date set for Wednesday, some teams will leave for the road this week — packing for a trip that could extend to 50 days if they reach the World Series.

It didn’t look like we would get here after the first weekend of the season, when the Miami Marlins had an outbreak in the organization and then the St. Louis Cardinals had one a few days later. The Marlins didn’t play for eight days, the Cardinals for 16, and doubleheaders piled up for those two clubs and their opponents, who had their own schedules interfered with. Remarkably, both the Marlins and Cardinals enter the final week in playoff position.

With the 16-team postseason tournament looming next week, we still have a few things to decide — most notably, which teams, especially in the National League, will actually get in. Here’s what to watch these final seven days:

The Dodgers, Cubs, Braves and Padres are in. After that, it’s a fight between six teams for four spots; sorry, Mets fans, your squad is seventh in this sprint, and its odds are slim. Look, this is a race to a .500 record, and it’s not exactly reliving the NL West race from 1993. With the recent talk about keeping the postseason at 16 teams, hopefully this will serve as a guide as to why that’s a bad idea. Of course, if your team is one of those scrambling to get in, enjoy the games. The teams and their remaining schedules:

Miami Marlins (28-25, 83.4% playoff odds): at Atlanta (4 games), at Yankees (3). After a slew of doubleheaders over the past two weeks, it’s seven games on the road. They’ll miss Gerrit Cole the final weekend, since he’ll be set up for New York’s first game of the playoffs. But they still have the toughest remaining schedule with the Braves and Yankees and a pitching staff that has been prone to blowout games (like Sunday’s 15-0 loss).

From the games that matter most to what the matchups would be if the season ended today, we get you ready for baseball’s wild sprint to the finish.
MLB Playoff Push &»

St. Louis Cardinals (26-24, 80.4%): at Kansas City (3), vs. Milwaukee (5): The Milwaukee series includes a Friday doubleheader. The Cardinals will have played 53 games in 44 days — thanks to 11 doubleheaders — and that only gets them to 58 games played. A final doubleheader against the Tigers will be played on Monday if it affects the playoff race — which is likely.

Philadelphia Phillies (27-26, 73.7%): at Washington (4), at Tampa Bay (3): The good news is the Rays will be setting up their rotation for the playoffs, so the Phillies will probably miss both Tyler Glasnow and Blake Snell. The Phillies also are battling injuries, without Rhys Hoskins and hoping J.T. Realmuto makes it back into the lineup on Monday. Their two aces, Zack Wheeler and Aaron Nola, are scheduled to go Monday and Tuesday, so they would be ready to go on Saturday and Sunday if needed. The Phillies hope Nola won’t have to make that final start and instead be ready for the first game of the postseason.

Cincinnati Reds (27-27, 52.2%): vs. Milwaukee (3), at Minnesota (3): A six-game winning streak last week got the Reds back into the mix, but there are no Pirates matchups left on their schedule. Luis Castillo will start Monday, so he’ll get two starts in the final week, but Trevor Bauer won’t pitch again until Friday — lining him up for Game 1 of the wild-card round if the Reds make it.

The Marlins are the surprise story of the season, given their 57-105 record last year and how they had to scramble just to fill their roster; they’ve used an incredible 61 players this season — 11 more than they employed last year in 162 games.

The Reds are the team the Dodgers don’t want to face in the best-of-three first round, even though they’re hitting just .212. Bauer and Castillo can shut down any lineup and send even the Dodgers home early. The Brewers also struggle at the plate, but they suddenly have a formidable one-two punch, as well, in Corbin Burnes and Brandon Woodruff, plus the one-two bullpen punch of Devin Williams and Josh Hader.

The eight teams are pretty much set here; it’s just a matter of what order they finish. The Rays, White Sox and A’s lead their divisions, with the Rays and White Sox sitting on 19 losses and the A’s at 20, so any of them could get the No. 1 seed. That’s not necessarily a big factor since everybody will be playing on the road after the initial wild-card series; but with the Indians the likely No. 7 seed, you really don’t want to finish with the No. 2 seed and have to face Shane Bieber in your first playoff game.

The Yankees and Twins look like they will face each other, as well, which is bad news for the Twins. The Twins have lost 16 playoff games in a row going back to 2004, 13 of them to the Yankees. No, the 2020 Twins don’t care what happened in 2004, but many will remember last year’s sweep or the loss in the 2017 wild-card game. The Yankees also are getting hot again at the right time, with Aaron Judge and Giancarlo Stanton both back, Gerrit Cole back in a groove and J.A. Happ on a roll (1.93 ERA over his past six starts). For what it’s worth, the Yankees (21-7) and the Twins (21-5) have both been excellent at home, and that first-round series is played at the higher seed’s home stadium.

A couple of weeks ago, Fernando Tatis Jr. had this one locked up; but over his past 12 games, he has hit .125 with no home runs and two RBIs. It now looks like a four-player race:

MLB’s 60-game regular-season sprint is coming down to the wire. Catch the excitement on ESPN.

On ESPN and the ESPN App; all times ET.
Don’t have ESPN? Get instant access.

Tatis might still be the favorite because he has received the most attention this season: Sometimes the storyline trumps the stats, especially in an otherwise close race, and Tatis owns the storyline with his blend of youth, excitement, style and power-speed combo.

What jumps out, however, is that Freeman and Betts have the much higher WPA than the two Padres hitters. Here is each player’s performance in high-leverage situations, when games are closest:

That doesn’t really seem to separate anyone. Tatis has performed his worst in medium-leverage situations, while the others all raked. Betts hit .429 against the Padres, the team the Dodgers battled for the NL West title. Tatis, meanwhile, hit just .205 against the Dodgers; he cleaned up against the Padres’ two worst opponents, the Diamondbacks and Rangers. Machado also struggled against the Dodgers, while killing the AL West (.414, 24 RBIs in 17 games). Freeman has hit .395 or better against three of his NL East rivals, struggling only against the Mets.

I think Tatis probably remains the slight favorite. But Freeman is surging late, a lot of the clutch statistics go in his favor and that big edge in batting average over Tatis could help — and the two Padres could split the vote.

This feels like a three-player field, made more complicated by the fact that one of them is a pitcher and two are teammates: 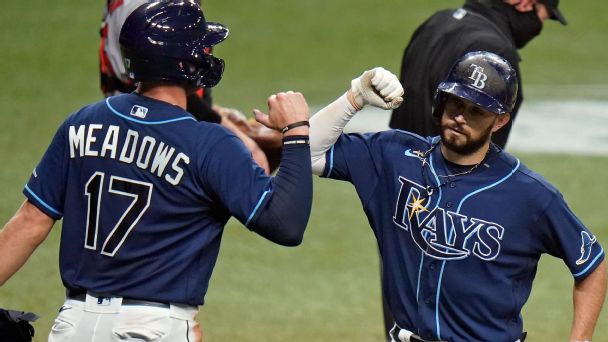 The stretch is on! How real are your team’s postseason hopes with just weeks left to go? ESPN+ MLB Stock Watch &»

Anderson would have a better case if he hadn’t spent time on the injured list. As is, he still leads the AL in runs scored and has a chance to win his second straight batting title. Abreu could lead the AL in RBIs for the second straight year — he is driving in Anderson much of the time — and is second to Luke Voit in home runs and slugging percentage. Abreu also is the team leader of the young and improved White Sox and an important mentor to the Latino players such as Luis Robert, Eloy Jimenez and Yoan Moncada.

As good as Abreu has been, you have to really dominate as a first baseman. And no player in the AL has dominated quite like Bieber. He has had to be this good because the Indians don’t score many runs. He has won three games by 2-0 scores, hasn’t allowed more than three runs in any start and has held batters to a .171 average with a 40.6% strikeout rate that would be the all-time record for a starting pitcher. (My take is that even though Bieber will qualify under 2020 standards, his record shouldn’t stand as the single-season mark.)

Anyway, because of the schedule, Bieber has faced the White Sox just once, getting a no-decision when he allowed three runs in six innings. In fact, Abreu hit one of the two home runs off him that game. The teams do play this week, and Bieber is scheduled to pitch on Tuesday. Maybe that contest will determine the MVP race.

With only 60 games on the schedule and 16 teams headed to the playoffs, the races are intense.
MLB standings &»

The White Sox shortstop was one of the most unlikely batting title winners in history last year, hitting .335 after entering the season with a career mark of .258. Absolutely nobody predicted him to win again, considering his ultra-aggressive approach at the plate (he walked 15 times all of 2019) and a .399 BABIP.

Well, he’s doing it again, with his .360 average trailing only DJ LeMahieu‘s .361 mark. And he is doing it his way. His walk rate ranks 134th out of 143 qualifiers. His .412 BABIP ranks third in the majors. Anderson doesn’t have elite exit velocity, but he hits line drives, his ground balls find holes and he is tied for the MLB lead with 11 infield hits. He is a little bit like Ichiro — though Anderson hits the ball harder and has more power — in that he has a unique style and approach that might not work for anybody else.