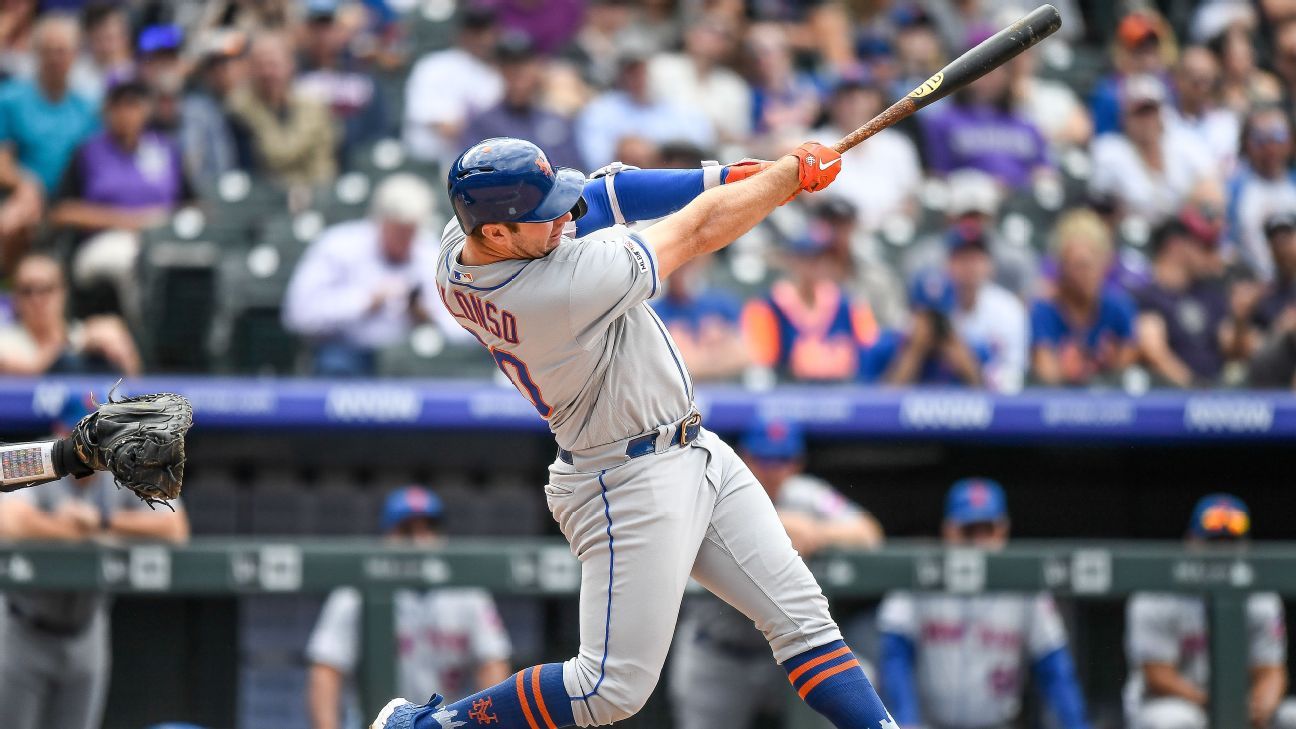 With the news that MLB is moving its 2021 All-Star festivities to Denver this summer, one thing immediately came to our minds: An All-Star Home Run Derby at Coors Field is going to be really fun to watch.

Sure, the game itself will be a blast and the MLB draft in the same location as the Midsummer Classic will make July even better for baseball fans — but a long ball contest for the game’s best sluggers at 5,280 feet? Yeah, sign us up for that … and let’s maybe even take the baseballs out of the infamous Coors Field humidor for a night to see what these guys can really do in the thin air of Colorado.

With that HR Derby excitement in mind, we asked ESPN MLB reporters David Schoenfield, Jesse Rogers, Joon Lee and Bradford Doolittle to combine forces to pick their dream field of eight for the event along with predicting how many homers it would take to win the long ball battle and just how far the longest homer of the event might travel. Hint: The first digit is going to be a 5.

What are you most interested to see when MLB All-Star week comes to Coors Field?

Schoenfield: Look, I don’t think it’s fair to say the game itself isn’t interesting. The past three games have all been one-run games, including two that went 10 innings (the American League, by the way, has won seven in a row), but it’s also fair to say the game simply is not as interesting as it once was. That is as much a reflection of the changing importance of all-star games, especially with the nightly availability of highlights and games from across the country creating the opportunity for fans to watch star players every night.

Anyway … Coors Field is about offense, so of course we want to see the Home Run Derby — which has been spectacular the past three times (Aaron Judge winning in 2017, Bryce Harper winning in front of his hometown fans in 2018 and then the epic Vladimir Guerrero Jr.-Joc Pederson–Pete Alonso battle in Cleveland in 2019).

Lee: I want to see dingers, and lots of them. I want to see Vladdy Jr. make his return to the derby. I would like to see Juan Soto hit lots of dingers in a derby. This would probably never happen, but I would love to see Shohei Ohtani in the derby as well. I want to see balls hit hard and hit far. I’m a simple man.

Rogers: The fences moved in. I’m kidding. How about a full stadium of fans? It won’t be quite the same if all these star players are entertaining in front of, say, 10,000 fans. A Midsummer Classic with COVID-19 conditions across the country at a level allowing for a full house along with a great tribute to Hank Aaron from MLB are the two things I care most about seeing. Of course, a Home Run Derby in the summer at Coors will be more interesting than the game.

Doolittle: That’s three months from now, and what I’m really hoping to see is Coors Field packed because it’s safe to do so by that point. I’m looking forward to businesses in downtown Denver getting a much-needed post-pandemic boost, especially the wonderful National Ballpark Museum at 1940 Blake St. I’m looking forward to seeing who gets picked for the game because to be selected remains an honor. And I always like to see the newest lines on the historical registers for All-Star Game results and MVPs. The tally right now is AL 45, NL 43, tie games 2. And of course I look forward to seeing Hank Aaron honored.

How many home runs will the winner hit?

Lee: Enough so that everyone in the crowd goes home with a baseball.

Rogers: Are we using juiced balls, humidor-stored balls or some other concoction to enhance the drama (and results)?

Doolittle: Sixty-three. I have no real basis for picking that number, but it looks as if it takes around 20 to win a round the past couple of years, barring a “swing-off,” and I tacked on one per round for Coors Field.

Are you ready for MLB Opening Day? Here’s everything you need to get up to speed for a new season on the diamond.

Who could pass Trout? | Excitement guide

Rogers: It might come in the game itself if he doesn’t make the derby. But Javy Baez will swing so hard his bat will travel 450 feet. The ball will land 524 feet from home plate.

Doolittle: This might be physically impossible, but even more than distance, I’ll be curious whether someone can reach the Rockpile seats in center field. Best I can tell, this Mike Piazza homer is the closest anyone has come to reaching them in a game setting. I did find an old article in which Walt Weiss claimed Mark McGwire hit the facing of that section in batting practice.

Maybe if it’s a particularly warm night and the wind is blowing in the right direction and Giancarlo Stanton gets into the contest … but it probably can’t be done. If someone does, we’re talking at least 500 feet or so, perhaps more because the section is elevated. But let’s go with that figure.

Who are the two players we absolutely have to see hitting bombs a mile above sea level in a Coors Field Home Run Derby and why?

Schoenfield: I’m going with the rematch of the 2019 final: Guerrero and Alonso. At Coors. Oh yeah, baby. And Alonso had better wear that chain from two years ago.

Rogers: The sight of Juan Soto staring down his batting practice pitcher is too good to pass up. Oh, and those bombs he’ll be hitting. One of the young faces of the game has to be in it. And since Nolan Arenado knows all about hitting at Coors, he’s in it as well. A former star coming back to haunt Colorado ownership in the derby in his old ballpark is a great narrative.

Doolittle: Let’s go with Fernando Tatis Jr. and Ronald Acuna Jr. Two young superstars who are good at just about everything, but both have a penchant for long, majestic homers and a knack for flourishing in the spotlight.

Novak Djokovic makes quarterfinals of Serbian Open
MS Dhoni on facing up to the Russell-Cummins rampage: ‘Not much you can really do’
Heartbreak aside, there are signs of life at the Waratahs
How hockey fights work during a pandemic: A conversation with one of the NHL’s last enforcers
Former USC offensive lineman Brown dies at 24