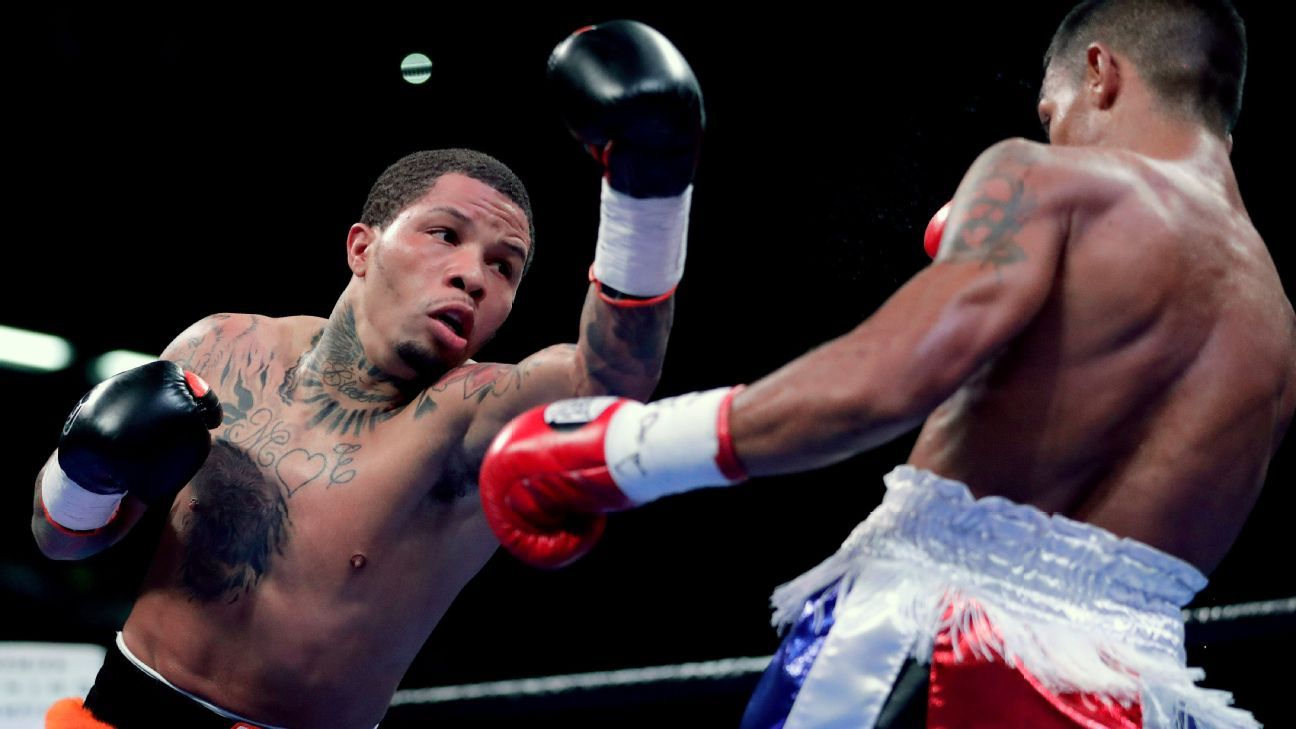 Junior lightweight and lightweight titleholder Gervonta Davis is going up to junior welterweight to face unbeaten WBA “regular” titlist Mario Barrios on May 26. Davis has had problems making weight in the past — he was stripped of his IBF junior lightweight title before his title defense against Francisco Fonseca in 2017 — so moving up in weight is not surprising. But is he at junior welterweight to stay? And are his options better at 140 pounds than at 135?

Top Rank Boxing is on ESPN and ESPN+. Subscribe to ESPN+ to get exclusive boxing events, weigh-ins and more.

KO sensation Edgar Berlanga is going for his 17th consecutive first-round KO victory on Saturday. Will he get it against Demond Nicholson, who has been knocked out only twice in 27 fights?

WBC lightweight titlist Devin Haney will next face Jorge Linares, and WBC interim titleholder Ryan Garcia will meet Javier Fortuna in separate cards. Are they on track to unify the WBC belt and give the fans a fight that they really want, and if so, when? And then there’s Andy Ruiz Jr., who returns to the ring for the first time in almost a year and a half on May 1. Can he get back on track and win a heavyweight title again after a disappointing loss to Anthony Joshua in their rematch?

Ben Baby, Cameron Wolfe, Michael Rothstein and Nick Parkinson answer these questions and more, as they dig into what’s real, and what’s not.

Real or Not: Gervonta Davis should stay at junior welterweight after the Mario Barrios fight

Wolfe: Not real. I believe Davis will eventually end up at 140, and maybe even touch 147, but those moves should be a few years away. His home right now should be the lightweight division (135 pounds), where he still hasn’t fought a true contender so far. No, the memory of then-38-year-old Yuriorkis Gamboa doesn’t count. The super fights that would create big money and interest are in this division, where Teofimo Lopez, Ryan Garcia and Devin Haney reside. Maybe those bouts eventually happen at 140 pounds. But Davis, who is the shortest fighter of that group, should work his way up rather than skipping a division.

Let’s hope his fun in the 130-division ended when he knocked out Leo Santa Cruz, unless he plans to make a superfight with Oscar Valdez; given Davis is promoted by Floyd Mayweather, and Valdez is promoted by Top Rank, I won’t hold my breath. Davis really has three potential divisions here with 130, 135 and 140, but junior lightweight makes the least amount of sense.

The fight with Barrios should be a fun test to see how Davis’ power translates in the 140-pound division against a longer and bigger fighter. Davis should win, but I believe Barrios will push him. Ultimately, that fight might give Davis a clue about how quickly he should be moving up the weight ranks.

Real or Not: Christopher Diaz’s experience will be too much for Emanuel Navarrete

Rothstein: Not real. Yes, Christopher Diaz has fought some high-level fighters — notably Stevenson and Ito — but he lost both of those in fairly convincing unanimous decisions. Navarrete has a similar number of fights, more professional rounds than Diaz, according to BoxRec, and Navarrete’s power is real. Even in his decision victory over Ruben Villa in October, Navarrete knocked Villa down twice to win the WBO featherweight world title, and he has shown his ability to close out fights.

Navarrete might not have fought the same caliber of competition at featherweight that Diaz has, but he’s plenty experienced and legitimate as an up-and-coming star in the sport. Navarrete hasn’t lost in almost a decade — his only professional defeat came on July 26, 2012, when he lost to Daniel Argueta — and while Diaz will be among his toughest opponents to date, Navarrete should be able to stick with him in this fight.

Real or Not: Edgar Berlanga will continue his first-round KO streak

Bradley: Real. Although his opponent on Saturday, Demond Nicholson, is coming off a five-fight winning streak, he has done it against limited competition. The biggest issue that I see with Nicholson is his defense. He will stay stationary with a high guard for too long and Berlanga’s speed, punching power and combinations will be too much for the Philadelphia native. It will not go past the first round — can anyone say Nigel Benn 2.0?

Real or Not: Ryan Garcia vs. Devin Haney unification fight will happen next (after their respective fights)

Baby: Real. I should be more cynical when it comes to big fights happening. But there’s really no reason for this one not to happen. Garcia whiffed on Tank Davis, and whatever he was hoping for with Manny Pacquiao. He needs a legit belt, and Haney has one.

If Garcia can get past Javier Fortuna, he will be more than ready for a title shot. These young lightweights were supposed to be all about big fights earlier in their careers. So far, only Teofimo Lopez has lived up to that billing. Garcia and Haney stand to lose some of their momentum by not facing each other.

Let’s not forget Ryan is fighting another Title Eliminator, when he could’ve easily been fighting for the TITLE 🤦🏽‍♂️😂🦆🦆🦆🦆 https://t.co/p7E9e6Wwdg

Real or Not: Andy Ruiz Jr. will win a heavyweight world title again

Wolfe: Not real. Ruiz’s path to winning a heavyweight title seemingly will have to come through Tyson Fury or Anthony Joshua, barring one of them vacating or losing his belt. With Fury and Joshua putting so much focus on becoming the undisputed heavyweight champion, it doesn’t seem likely that either will be vacating anytime soon. Ruiz, 31, is in the same age range as Joshua, 31, and Fury, 32, so waiting them out seems unlikely, too.

Yes, Ruiz has knocked out Joshua before, but it seems clear he caught the British champion slipping on that special night. As we saw in the rematch, Joshua is a better fighter than Ruiz, and it seems likely that a third fight would play out in a similar fashion to the second bout. And I’ve got Ruiz’s chances to beat Fury as even lower than his chances of knocking off Joshua. A successful Ruiz career revival will be good for boxing, and he can certainly reestablish himself as a top heavyweight contender again with better focus and training. But champion? I don’t see that happening.

Real or Not: Michael Conlan’s best chance to win a world title is at junior featherweight

The Irishman stepped down a division to junior featherweight last year when he discovered he was naturally making weight for that division.

“It’s a natural move to 122 pounds; it’s not about titles or anything else. The realization that I could easily make 122 pounds and be strong at that weight made the decision of where I should be boxing. It’s always been my dream to be a three-weight world champion — junior featherweight, featherweight and junior lightweight — and that’s possible again now.”

A training injury has delayed Conlan’s progress, but he is being moved toward challenging Stephen Fulton (19-0, 8 KOs) for the WBO junior featherweight title. Conlan is ranked as the No. 1 contender in the WBO and a victory over Ionut Baluta on May 1 will set up a mandatory title shot at Fulton, who won the belt with a unanimous decision over Angelo Leo in January.

However, it might take some time. Fulton is being lined up to face the winner of the May 15 clash between WBC champion Luis Nery and secondary WBA titleholder Brandon Figueroa in a September world title unification fight. Conlan will have to wait for the outcome of that fight to learn whom he must beat for his first world title.

Conlan’s experience as a top amateur — he competed at two Olympics — and the slick skills he has shown in a 14-fight unblemished record (8 KOs) mark him out as a future star of the junior featherweight division.

At 5-foot-8, Conlan is tall for a junior featherweight and taller than the current world featherweight titleholders, so size won’t be an issue when he steps up a division.

Tavatanakit leads LPGA Thailand event by 1 shot
DeGrom exits with side tightness, to have MRI
Ready or not: Bears’ next QB dilemma is when to play Justin Fields
Sources: A-Rod group hasn’t closed Wolves deal
England to face USA, Canada in front of 10k fans